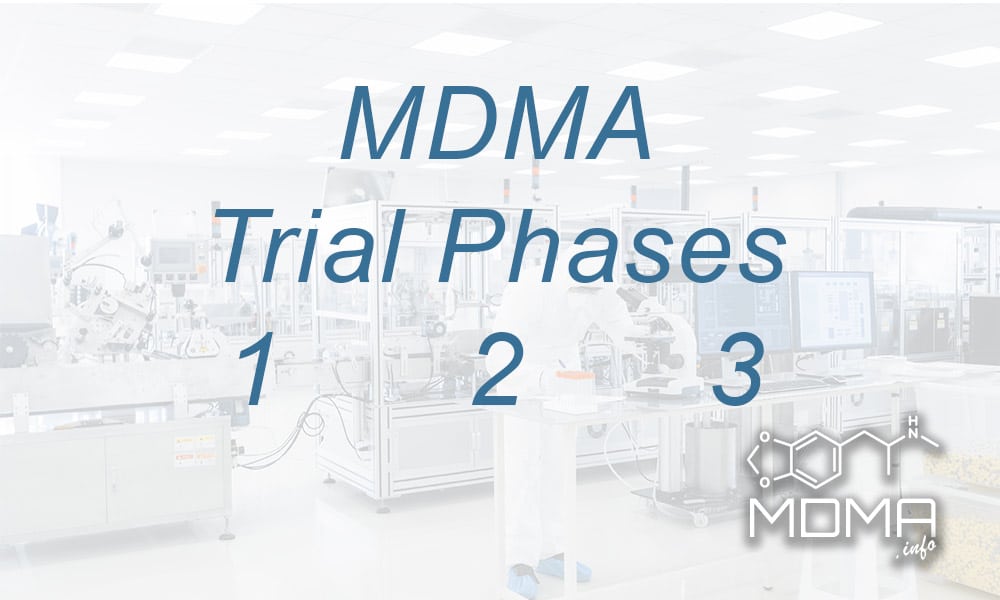 Clinical trials for testing new treatments are subdivided into various stages known as phases. The initial focus may be to check whether the drug is safe for use or if it has any side effects. Maybe what are those side effects as well, that may be presented.  Immediate trials tend to aim at testing if the new treatment is better than any of the existing ones.
When it comes to clinical trials, these are generally done in phases. Testing in humans is done in a series of trials. It is these trials we call the phases, and each phase has a specific objective. In some cases, some tests may have an initial phase called phase 0, while other trials can go up to phase 4.

This is usually the earliest trial of MDMA in individuals. This phase is an early look into finding out if the drug acts according to how researchers predict from the laboratory studies.

It usually involves quite a limited number of people. They are given a minimal dose of the drug. The amount of the drug for example may be too small to end PTSD symptoms. There is also a minimal chance of experiencing the side effects.

Here are some of the key objectives that phase 0 trials aim at finding out:

It involves small trials engaging just a few patients. The sample number can vary but is often between 20 – 50 persons in this phase. The test may be open to any person experiencing severe post-traumatic stress disorder, usually those who have already taken other medications other than MDMA.

It is in this phase that the patient is given small doses of MDMA, and is monitored for any reactions. Provided that the testing is going well, then the patient is given a slightly higher dose. This is continuously done until the best dosage to give a patient is found. During this trial as well any side effects and patient wellness is monitored. Blood testing may be involved as well as urine samples as these give indicators of how the body is coping and also how the body is getting rid of the MDMA.

Phase 1 trial aims at finding out:

In this phase, the MDMA is now tested on a larger group of persons who may be experiencing, for example, PTSD symptoms. This phase can also include individuals with all forms of PTSD. There may have been various side effects which did not have surface in the previous trials. In here as well the comparison is done of the MDMA treatment with other treatment processes in use.

Here can be the introduction of a placebo as well as randomization to reduce the chances of any psychosomatic results. The 2nd phase is to get a better idea of the MDMA effects.  This phase aims at finding out:

In this phase which was done over the course of a year, it was shown that 67% of patients who received 2 or 3 sessions of MDMA-assisted therapy did not show any signs of PTSD. Within the control group in the phase II trial 23 percent saw the same benefits.

In phase 3, doctors compared the new treatment with MDMA-assisted therapy again with the most standard treatment available. The number of persons in this phase tends to be a few hundred to even as many as a few thousand patients. This is important to capture any other factors which were not found in the previous phases. Trials here would tend to last more than a year.

So far in the studies, there was randomization of patients with severe and chronic PTSD into two double-blinded groups. One group was given three MDMA-assisted therapy sessions, the control or the second group was given a placebo. What the results showed was that there was significant reduction in the PTSD symptoms, and even some of the depressive symptoms as well.

Preliminary findings in this phase is that the MDMA helps in raising compassion and understanding while reducing fear factors. This seems to enable it to be effective. Of course do note that further research is needed to compare current PTSD treatments with that of the emerging indings of MDMA.